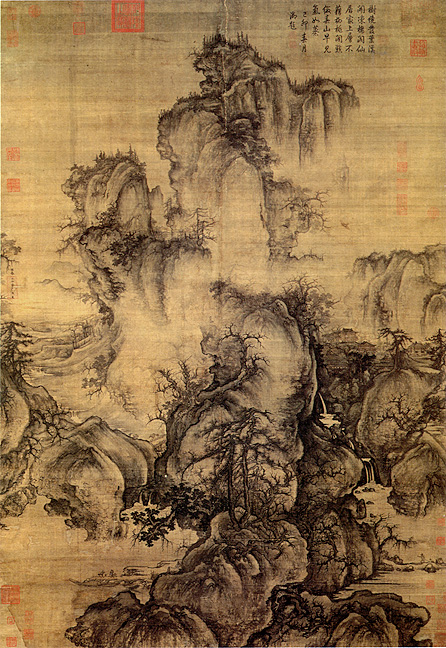 ‚The Seeing is the Doing’

As a child I had the opportunity to study some of the outstanding SKIRA-Volumes, once edited in Swizzerland and famous for their Print-Qualities in those days.
– I loved them tenderly.
I started with a small Picasso – SkiraVolume, followed by a small one of Fra Angelico : pictures with wonderful genuine Gold-Applications – in other AngelicoEditions all these heavenly glitterings in different parts of the images were lost when printed in ‘yellow’.
The same phenomenon I experienced later in one of Mantegna’s paperstudies I saw in an exhibition : “Christ descending into hell – [Discesa al Limbo]“: ‘Wind’ is blowing out of the hellish depth, artistically formed with glimmering golden strokes like a ‘golden’ storm engulfing Christ’s clothes — Never to realize when gold is yellow-colored printed. You get only a vague glint in books what’s going on.
(So I learned that Reproductions are always meager substitutes for Originals. Not only concerning ‘Gold’. ..The Seeing is the Doing…)

There were naturally other influences I was exposed to. During my youth and some times later. An aunt of mine took me to Kassel’s “Gemaeldegalerie”.
Here I saw – the Seeing is the Doing! – my first Rembrandt and my first Venitian Painter : Titian. Best examples of an Art, making COLOUR the realm of extraordinary pictorial strength.
(The author being intoxicated since by Colors and Color-STROKES. Enhanced by his Chinese Experiences)

Last not least Caravaggio. Whenever I could see a picture of him – climaxing in this extraordinary, awesome strucking “Beheading of St. Joan” in Valetta (a masterpiece of European Art.
Installed like a Theaterscene) I will not shun travelling long distances to visit it again.

To add: I like Dancing. I like S W I M M I N G – executing ‚Strokes‘ in pristine waters.

Why did I add: “I like dancing and swimming”? To this almost ecstatic account?
It’s pobably just that what I have to do in my working. With my media. Bringing lazy minds (and bodies) in motion. Even when I urge People to stop sometimes. ( My advertising in the L.A. Times)

I thought it over today. Searching for an example in Art-History. Found a Goya-picture. Showing the bloody Spanish rebellion against the French occupation-troups.

The body in the center being pulled off the horse.
Crazy Colorstrokes running downwards. Emptying itself like flowing out of an opened bottle.

Expressing finally a wishful thinking of the time: to get rid off the hated foreigners…

One knows all these boring history-paintings. Allegedly picturing historical events neutrally.
On the contrary: Goya’s unforgetful painting.
You get captured by the fury of the painter during the painting-process. It’s the ecstatic movement that counts in Art.(Nietzsche: ‚RAUSCH MUSS SEIN. EHER KOMMT ES ZU KEINER KUNST!‘)